Ever heard of a barber who can afford a lavish lifestyle of owning a fleet of luxury cars like Rolls Royce, BMW, Mercedes, Jaguar, Audi, etc.? Meet G. Ramesh Babu, a humble and down-to-earth barber from Bangalore, India. Here is his rags-to-riches story that like most others, looks interesting and fascinating from outside, but involved a lot of hard work and perseverance. 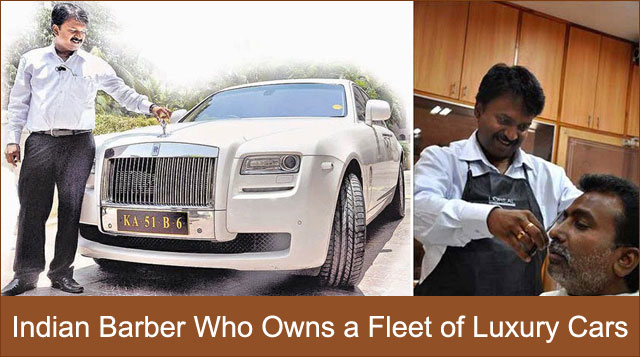 Ramesh Babu’s father was a barber and the whole family survived on the money his father earned from his small hair cutting salon ran from a rented shop. Ramesh was just 9 years old when his father passed away in 1979. The family rented out the barber shop that his dad had left to his uncle for a meager sum of 5 INR (i.e. about 10 US cents) per month.

His mother worked as a housemaid who often used to bring leftover food to feed her family, which consisted of Ramesh, his brother, sister and his mom. There was a time when they survived on just one single meal a day. When Ramesh was in the middle school, he often took up odd jobs like newspaper vendor, milk bottle vendor, etc. to make both ends meet. Thanks to his mother who insisted on prioritizing his education, he somehow managed to complete his tenth standard and join an evening pre-university course (PUC).

In early nineties, when Ramesh was in the first year of his PUC, his uncle stopped paying them even the meager sum he had been paying as rent till now. This resulted in a bitter quarrel between his uncle and his mom. As a result, Ramesh took over the barber’s shop from his uncle and started working there in the day while attending his college in the evening. After coming back from the college in the night, he again worked in the salon till 1 AM. He ultimately had to drop out from PUC due to work pressure but later completed his diploma in Electronics from Industrial Training Institute (ITI).

Later in 1993, when his uncle bought a used Maruti van, Ramesh was filled with petty pride to buy one for himself too. He pooled together his small savings, took a loan and bought a Maruti Omni van. Though this gave him a grim satisfaction of having bought a slightly better car than his uncle, it was by no means an easy task. He had to mortgage his grandfather’s property for the loan and repayment of EMIs was taking his sleep away. It was at this time that the lady who his mom worked for (Ms. Nandini) gave him the idea of renting out the car instead of keeping it idle. She taught him the basics of car rental business and also helped him get his first client; he rented out his car to Intel, where Ms. Nandini worked.

Since then, there was not looking back. He started taking his car rental business seriously and gradually added more cars to his fleet. In 2004 itself, he had 5-6 cars but the competition at this level was intense. This made him venture into luxury cars and he bought his first luxury car for about 40 lakhs INR (i.e. about (60,000 USD). Now, this was a huge risk but it paid off remarkably well for Ramesh.

The rest, as they say, is history. Today, Ramesh Babu owns a fleet of more than 200 cars that includes over 70 premium offerings. His clients include big Bollywood stars like Amitabh Bachchan, Shah Rukh Khan, Amir Khan, and Salman Khan, to name a few. His next dream now is to add limousines to his fleet.

But that’s not all about Ramesh Babu. What is even more striking is the fact that he still wholeheartedly practices his old profession of barber in his salon, Inner Space, located near Chinnaswamy stadium in Bengaluru. Though the income from the hair cutting salon is quite modest, he doesn’t want to lose touch with his roots. Most of the days, you’ll see him driving to his workplace in a Rolls Royce Ghost. He has loyal customers coming from far off places like Kolkata and Mumbai for a haircut.

Even if you reach the highest milestone in life, you should not forget your past. That is what Ramesh believes in. And that’s why he is also teaching the skill of hairstyling to his children – two daughters and a son.

The Millionaire Barber, Ramesh, has also been featured on TEDx Talks: