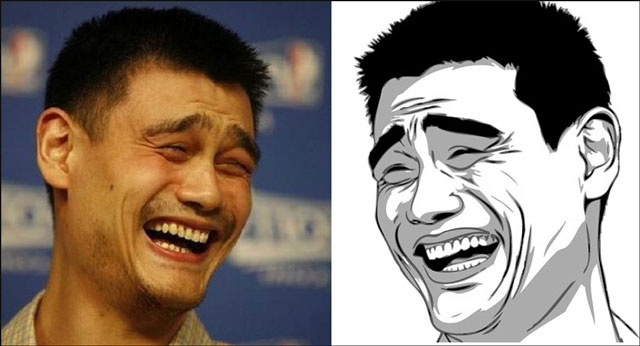 There is hardly anybody that has not seen this photograph on Facebook. It is often used to share jokes, memes and other light hearted stuff. But have you ever imagined whose photograph is that? Who is that guy in those innumerable memes shared virally on Facebook?

Many people think that this picture of a Mongolian looking man is just a sketch and has got nothing to do with any real person. But this face featuring in innumerable memes on Facebook is of a real guy. Guess who. He is a Chinese basketball player, Yao Ming.

The drawing of Yao Ming virally circulated on Facebook is based on his expression photographed during a post game press conference he held in May 2009. A journalist from the same conference decided to use the sketch of that still shot as a cartoon. The sketch was an instant hit among Reddit users and also become popular on Facebook.