It was in 2003 that Le Van, about 55-year old Vietnamese man from Ha Lam Town, Thang Binh district of Quang Nam province, lost his wife Pham Thi Suong, but could not let go of the feeling that she was still with him literally. Since he could not sleep without hugging his beloved wife, he started sleeping on her grave and continued doing so for about 20 months.

But when rain and water started getting the better of him, the grief stricken husband came up with an idea of digging a tunnel from his home to his spouse’s grave in order to continue sleeping with his deceased better half without getting drenched in the rain. His children got to know of his plan and forced him to give it up. 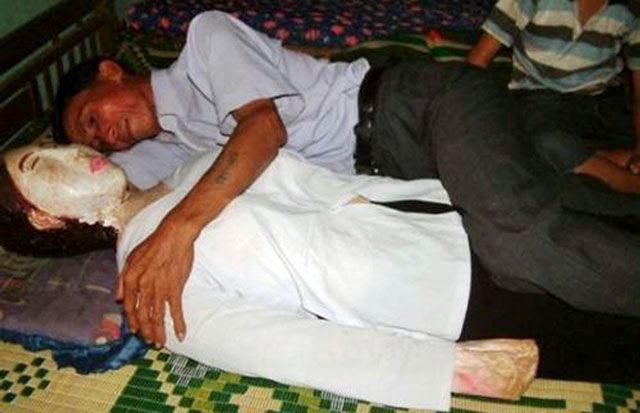 So, in 2004, Le Van dug up the remains from the grave of his life partner and brought them home. He wrapped them in flesh-colored paper and clay and dressed it up to make a human-sized doll with a dummy mask. It has been over 10 years now but he has been sleeping with the remains of his wife ever since.

The news hit the headlines in 2009 when it was found that he had been sleeping next to his dead wife for 5 years. Some reporters revisited him after 2 years and the man was still found sharing bed with the body of his wife. Local authorities requested him to bury the body but he refused; he said he was training to return to the incarnation of his previous birth.

Le Van and his deceased wife Pham Thi Suong were close neighbors but they fell in love only after getting married. They were doing well as carpenters but Le Van later on got involved in illegal lotto that led to their financial downfall. Van had to move in to a smaller house and also quit carpentry. He became a rock exploiter and his wife made incense sticks. This however did not affect the love between the couple; Van never let his wife work hard. The couple has seven children.