Most of us believe that it’s the electricity that throws us if we happen to touch a live wire. However, it’s not the force of the electricity that throws us during an electric shock. The electric current only contracts our muscles. However, the sudden contraction of muscles in our body is so powerful that we are thrown away due to the force of the muscles. Thus, basically we are strong enough to instantly throw ourselves off. 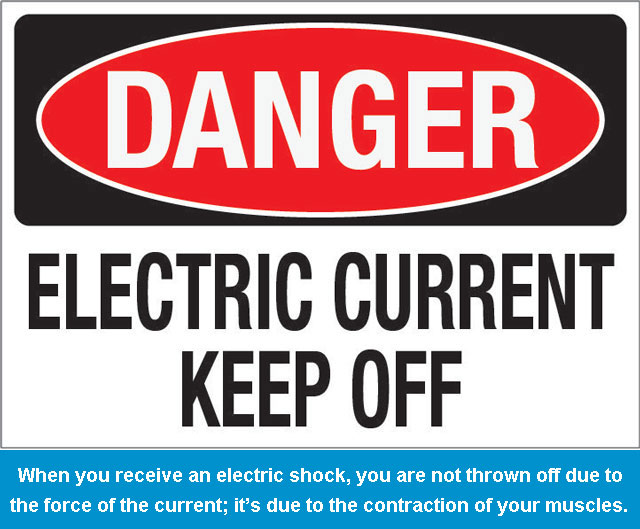 Electric shock occurs when a part of the human body comes in contact with any source of electricity of some high magnitude. Physical contact with energized devices is the most common reason for an electric shock. The injury caused depends on the magnitude of the current. If the shock is caused due to small current, it is generally harmless. A strong magnitude of current may cause some kind of discomfort in people and may induce involuntary muscle contractions.

Hence it becomes very important to take precautions while using electrical devices. If the shock is caused due to high voltage, it may damage the tissues, which is also termed as fibrillation.

There are many complications that may occur due to electric shocks. One such problem is burns. If the amount of current is less, there will be a superficial burn on the surface of the skin. There are lots of neurological effects related to electric shocks. In some cases, the respiratory system may be paralyzed.

Electrical shock may result in muscle contractions, even leading to fractures. Some of the theories say that when you have to approach any livewire, touch it with the back of your hand. The body goes into spasm with the electrical contact. If you are using your fingers to touch the wire, the muscle spasm closes the hand gripping the wire, and it will not allow you to remove the hand from it. Most of these effects are from the muscle spasms within the body and not really from the electricity.

All the muscles in the body are controlled via electrical impulses. When a person touches a live wire, this massive pulse tenses all the muscles it passes through. If it happens to the legs, then there will be an involuntary jump. Hence, it may not be the electricity that pushes the person. It could be due to the extreme muscle reaction.