The Newcastle based British design and marketing company, onebestway, was passing through some real tough time. It had already gone through several rounds of layoff when the business psychologist David Taylor was called in. And the solution he suggested was next best to layoff – stripping the staff of their clothes! So, the company decided to have a naked Friday in April 2009. 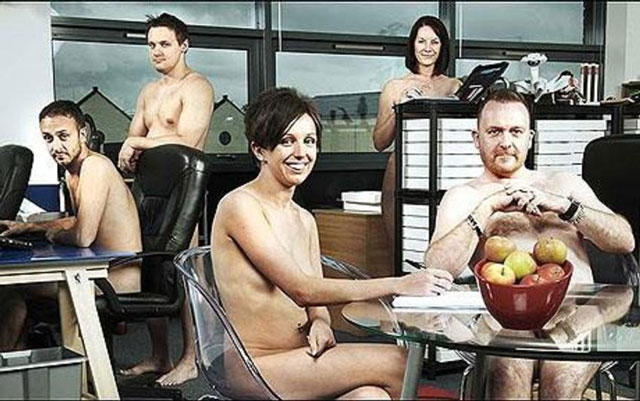 According to Taylor, going naked would boost team spirit and improve morale of the employees. But as he himself acknowledged, this was the most extreme technique he had ever used.

The staff were taken through a week of counseling and office activities to build up the courage for this unprecedented Naked Friday. A nude model was brought in to talk to the staff. They were also asked to sketch the nude model, photocopy various body parts and discuss the issue at length. As per the company, this was not compulsory though. All those who felt comfortable were asked to strip down to skin on the D-day.

Most of the employees turned up completely naked except for a man who hanged a pouch, and 2 ladies who felt it better in black underwear. The front-of-house manager, Sam Jackson, 23, who suffers from cerebral palsy, was the only female who bared it all. “Now that we’ve seen each other naked, there are no barriers,” she said.

So, did this stunt really work for the company as expected? The ‘naked event’ was a huge success and is said to have turned around the company’s fortunes. According to the Managing Director, Mike Owen, it gave them the boost they wanted and helped them come closer professionally and personally. As he puts it, “It’s not a sexual thing. If you do anything scary as a company, it encourages bonding.”

The bizarre exercise also garnered the company some solid media exposure. This unique experiment by onebestway in April was also filmed for a TV show, Naked Office, that was to be aired on British cable channel, Virgin 1 on July 9.

So, what do you say? Not a bad idea during hot summer days when the mercury is soaring, isn’t it? Then why not suggest it to your boss? But at your own risk!!