Thane Chiquinho Scarpa, one of the famous and richest persons in Brazil, created a lot of media attention recently. He announced that he will bury his million-dollar Bentley so that he can drive around after he leaves this world. This was indeed a crazy announcement. Media criticized him for his decision that seemed a sheer waste of money serving no good purpose. Many suggested that he donate the car to some charitable organization instead of burying it in the ground. But Scarpa carried on with his plans. 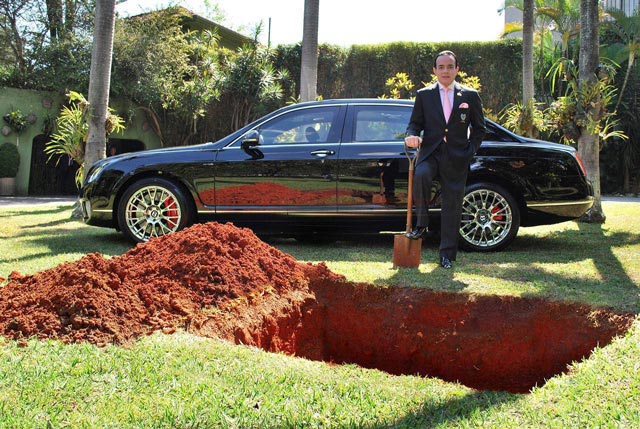 He organized a ceremony for this purpose. But on the day of the ceremony there was a surprise for all those who had gathered. Before the car was lowered into the grave, Scarpa disclosed his genuine intention. It turned out that he wanted to create awareness for organ donation.

Speaking about the incident, he said that people criticized him for burying his million-dollar car but there are many other things more valuable than car that are buried along with our body. People bury the most valuable organs like liver, lungs, and kidneys. Instead of burying these vital organs after death, you could actually save someone’s life. These organs can be used for transplantation, which could help save many lives. A person can lead a normal life after transplantation.

He wanted to prove this point and was applauded by many people. It was the most innovative way of inaugurating the organ donation week in Brazil. You can register as a donor and can help save many lives. There are lots of organ procurement organizations that help in raising awareness about organ donation. They reach out to communities by organizing programs in schools and distributing information through printed and electronic material.