The Lujan Zoo near Buenos Aires, Argentina is perhaps the most dangerous and most controversial zoo in the world. It allows visitors to go close to animals and cuddle them, feed them, take selfies with or even ride them; and this includes animals as dangerous as lions, bears and cheetas. Of course, it will cost you additional fees to get the fences and partitions removed. And you also have to sign the papers saying that the zoo will not be held responsible if you are eaten by the predators. 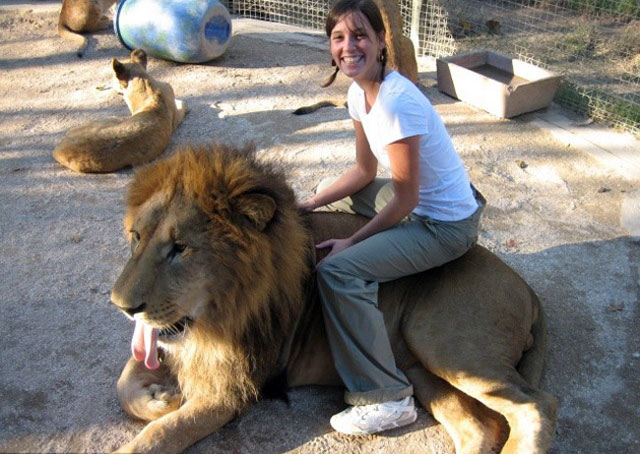 Given the crazy videos the visitors come up with, no doubt most of them enjoy the ‘thrilling’ experience but it is equally true that they find the zoo premises risky and shocking. Going by the firsthand account of some visitors, the animals in the zoo are often abused and neglected. Some even claim that the animals are drugged and sedated to make them ‘behave well’ with the guests.

The zoo has attracted the attention of several animal rights organizations who call it a gimmick at the cost of animal welfare. As reported by Daily Mail, Will Travers of Born Free Foundation called it an accident waiting to happen.

However, if the zoo officials are to be believed, the wild animals are raised with domestic dogs and well trained to teach them their ‘boundaries’. They are fed well so that they don’t feel hungry when they are with their human visitors. The zoo manager says that there was no accident reported till now and as a precautionary measure, two or more trained keepers are always present inside the cage.

The Lujan zoo had one monkey, 2 lions and some grazers when it opened to public in 1994. But today it boasts of over 400 different animals that include lions, tigers and bears. Interestingly, Argentine law prohibits direct contact of animals with a member of the public, and thus the zoo itself seems to be illegal.

A Facebook campaign was launched to shut down the zoo. Animal rights activists sent the Argentine Government zoo photos posted by users on social media sites. The government launched an investigation in 2014 and the zoo also stayed closed recently. It is however not clear whether the closure is temporary or permanent. The official website of the zoo is still live and the phone numbers are still working.